"Industrial policy is very important for the guiding role of the automobile industry. One of our work this year is to revise the development policy of the automobile industry. With regard to the issue of joint-stock ratio, we will seriously study with the enterprise, and finally there is a saying." Department of Industrial Policy, Ministry of Industry and Information Technology Deputy Director Lu Xi said at the "2014 China Automotive Forum Closed Meeting" held recently.

He also revealed that the relevant leaders of the State Council have asked the Ministry of Industry and Information Technology and other ministries to speed up the revision of the automobile industry policy.

Domestic car companies facing a decline in the market share of their own brands expressed unanimous objections to the liberalization of the joint-stock ratio.

The "Automotive Industry Industrial Policy" promulgated and implemented 20 years ago clearly stipulates that China's auto industry follows the 50:50 "equity standard" of Chinese and foreign parties in the joint-stock ratio. Last year, the Ministry of Commerce stated that â€œthe restrictions on foreign investment in the general manufacturing sectors such as steel, chemicals, and automobiles will be further liberalized.â€ At one time, it caused heated discussions in the industry.

The policy of holding foreign shares not exceeding 50% is regarded as a â€œred lineâ€ for the establishment of a complete vehicle joint venture in China. As China emphasizes deepening market reforms, the dispute over whether Chinese and foreign joint-venture stocks of automakers can release the 50% share ratio is heating up.

â€œIn the open market resources and full competition environment, the pressure of the weaker side will be greater. However, with open cooperation, the gap between independent brands and foreign brands is narrowing and the distance is getting smaller and smaller. If at this time, the joint venture shares will be released. More than the agreement, joint venture, development, leadership, control and voice are very passive, especially talents, procurement networks, marketing networks and other resources will be attracted to foreign companies, I think there is a great impact on independent brand enterprises." Xu Jianyi, chairman of FAW Group, said at the closed-door meeting mentioned above.

"We have been in the WTO for more than ten years, and now we are entering the second decade. How to achieve sound development of independent brands and support the realization of the country's "powerful country dream" is an important issue facing the development of China's automobile industry. "Xu Jianyi believes Self-owned brands are still not competitive and cannot compete with foreign brands. In the open market resources and full competition environment, the state of the Chinese auto market is that foreign brands are getting stronger and stronger, and their own brands are getting weaker.

â€œIndependent brand car companies are currently facing very severe difficulties. I suggest that the government can delay as much as possible, so that independent brands can master foreign technology as soon as possible in recent years, or master most of the technology, so that our own brands can develop rapidly.â€ Wang Shiping, deputy general manager of Brilliance Automotive, said.

Chen Bin, director of the Industry and Development Department of the National Development and Reform Commission, said: "Automotive joint ventures should be more compatible with the reform of the company. From the perspective of market economy development, the auto joint stock ratio must be released, but we have now Mature conditions, including our independent innovation mechanisms and institutions, including the market environment for socially fair competition."

It is understood that the revision of the auto industry policy will strengthen how to guide the development of self-owned brand cars from the top-level design. Dong Yang, executive vice president and secretary general of China Association of Automobile Manufacturers, said: "We recommend this version of industrial policy research to formulate a sustainable development strategy for China's auto industry, to build a car-powered country, and to protect consumer interests.

Two-dimensional Mixer is suitable for the mixing of dry, powder and granule materials for the pharmaceutical, chemical industries etc. Especially for mixing of materials with high moisture content and a wide particle size distribution.


The barrel of EYH two-Dimensional Mixer has two movements, one is the rotation of barrel, and another is motion with the swing frame. The mixed materials rotate and turnover in the barrel. With the two movements, the material can be mixed well in a short time. 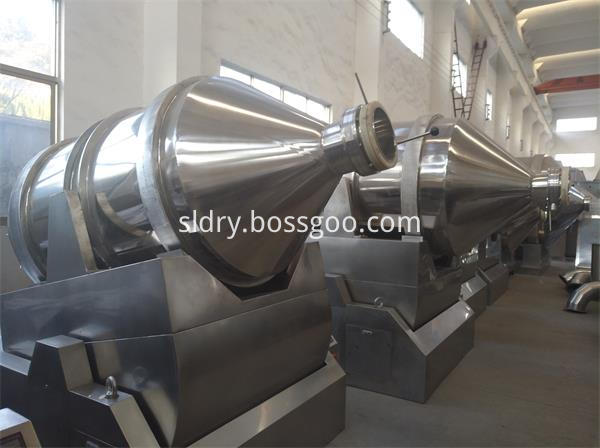